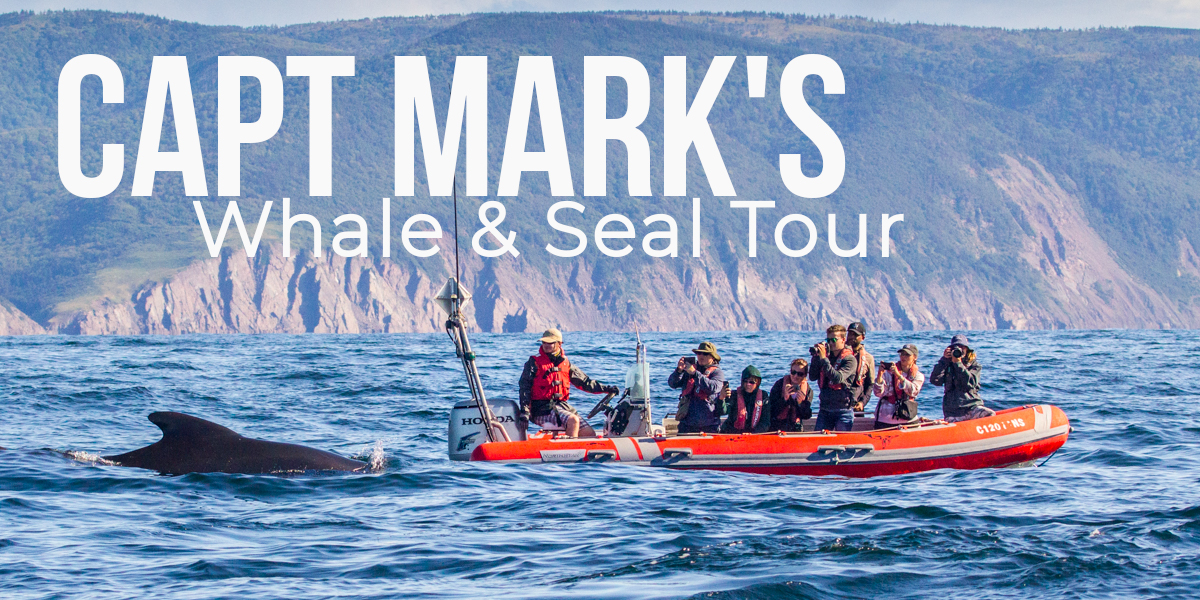 Rachael and I had one big regret from our time in Baja this winter, we didn’t do a whale watching tour. These massive mammals make colossal journeys along the coasts of North America and we only caught a glimpse of them from a beach near Cabo San Lucas. When we started planning our trip to Nova Scotia and Cape Breton Island, we decided that we would book a tour and take our chances seeing these creatures on the opposite end of the continent in St. Lawrence Bay.

Enter Captain Mark. When you research whale watching on Cape Breton Island, this shop comes up over and over- fantastic reviews of a fun and educational experience with a local who respects the animals and knows the area extremely well. Sit tight as this is another review about how AMAZING our time with Captain Mark was.

Booking our trip was dead simple. Captain Mark’s website is super easy to use and processing was fast and secure. It took me less than five minutes to book our boat and are we glad that we did. The docks were littered with people who neglected to book early and were high and dry because they didn’t book early. Book early folks, Captain Mark fills up quickly.

We arrived 30-minutes early as the instructions online had told us to and the staff got us checked in, provided a receipt and had us sit tight for life jackets and departure. The life jackets were top of the line and were the smaller CO2 filled variety. This was a pleasant departure from the big clunky orange jackets that we were expecting.

Captain Mark greeted us on time and led us down to the boats. The pre-departure chat was informative and included all of the safety precautions about what to do if you go overboard or if the captain is rendered unresponsive. All required safety equipment was on board and we felt very secure in the Zodiac.

Let’s talk about the boats for a minute. When researching, I was expecting a large boat (think lobster fishing boat) with a ton of people on board and a creeping slow engine. We chose Captain Mark’s because they utilize a smaller, faster, and much more environmentally friendly watercraft, a Zodiac. The Zodiac is a combination of inflatable pontoons and a rigid frame that is one of the most common short distance watercraft in the world. Organizations that rely on speedy and concise travel in the water like the US Navy Seals and environmental protection agencies from around the world use the Zodiac for good reason, it works.

There are two Zodiac models available from Marks, the Northstar and the Tourmaster. The first is a smaller boat with outward facing seats and a smaller engine. In our case, this boat was captained by one of Captain Mark’s staff. The boat we booked was a bit bigger and had forward facing seats with 2 larger motors. The seats were as comfortable of seats as you could expect from a small ocean-vessel and the ride quality was extremely fun.

We departed the harbor on time and in style as Captain Mark pinned the throttle and the Zodiac sprang to life with the bow high in the air and the passengers all smiling ear to ear. Despite the 4-5 foot swells, the boat handled the rough water well and we never felt unsafe or like we would fall overboard.

Once we got to open water we quickly spotted a family of pilot whales surfacing a short distance away. Every few seconds several pairs of whales would surface and spout from their blowholes. The benefit of the Zodiac over the larger vessels was obvious quickly, Captain Mark’s boats could simply get close to the animals quickly and turn off their motors in time to not disturb the animals. We drifted alongside this pod of pilot whales for around 30-minutes. Some would taper off to open water while others seemed to revel in the social interaction with humans and the attention that accompanied it.

The competing whale watching companies in the water at the same time as us were in larger boats, potentially old fishing boats. The boats seemed to rock more in the swells than the lighter Zodiac raft did and they were much slower, arriving to the site of the whales after they had long since left. We were glad that we were booked with Captain Mark.

After the first pod disappeared, we continued North and started to edge in closer to the shore before we came across a second large pod of pilot whales. These whales, much like the first pod, mostly stayed near the boat performing underwater turns and rolls before breaching close enough to the boat that we could feel the spray. I’m convinced we could have stayed with that pod all evening and they would have continued to put on a show for us.

We left the pod and turned toward the shore where the real beauty of the tour began to shine. The amount of unique local knowledge that Captain Mark shares on his tour is impressive- from old settlements that no longer exist to Buddhist monastery that offer a 3 year retreat on the cliffside of Cape Breton Island.

Captain Mark took his time navigating the coast and pointing out points of interest as well as an abundance of seals, eagles, and even some “wild” horses on an isolated beach. Mark seemed to be as involved in the local community as he was in his tour business and had stories to prove it. The boat ride itself was a fantastic adventure even if we hadn’t seen whales. The Zodiac is a blast to ride in and it made spotting and seeing the whales up close extremely easy. We had so much fun and we can’t wait to come back to Cape Breton just to enjoy Captain Mark’s tours.

To learn more about Captain Mark’s tours and to book your excursion check out their website: https://www.whaleandsealcruise.com.