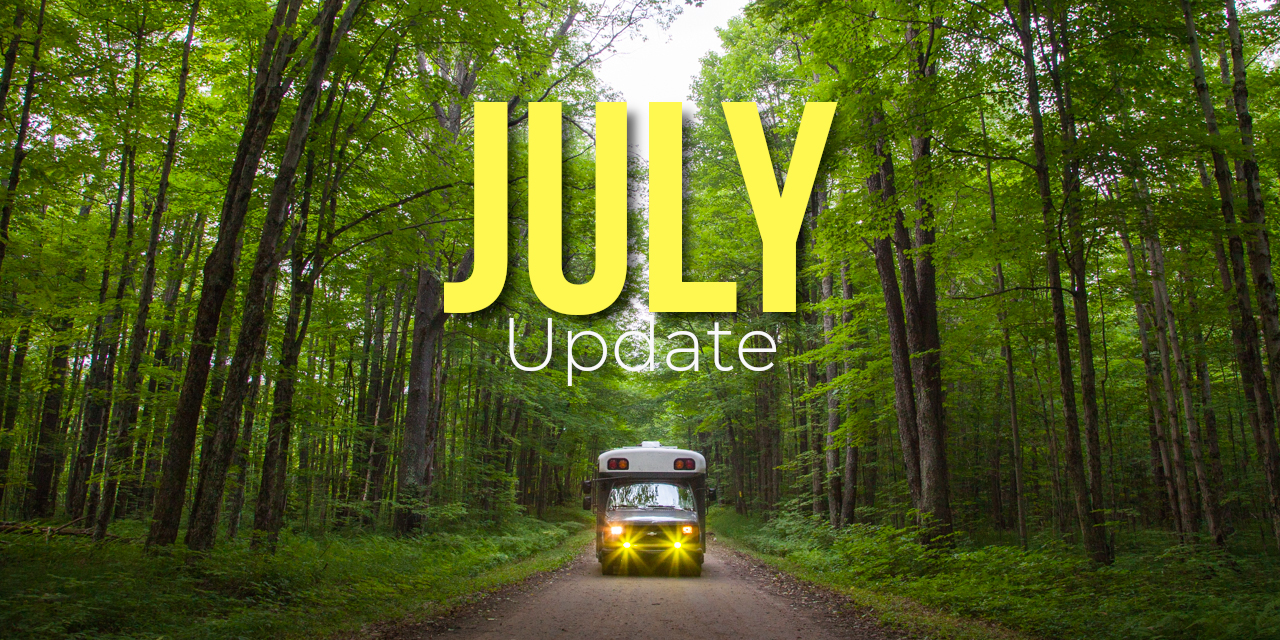 July has been an interesting month, to say the least. We said goodbye to family in South Dakota and began our slightly mad journey to the East coast. The journey was mad only because we chose to do it in the hottest month of the year in a bus without air conditioning. July was also a lot of driving and not a lot of enjoying locations on the map, hopefully August will slow down and cool off a bit. We are still on track to visit all 49 driveable states by 2020 and we knocked several off of the list in July.

We are on a journey to see all 50 states together and to take our bus to 49 of them, so a side trip to North Dakota was needed. ND gets a lot of hate from the other states and it is pretty obvious why…there is not a lot there. One place worth mention and a visit if you are close is Theodore Roosevelt National Park. Unfortunately for us, our vehicle was too big to pass through the construction area on the road in the park so we only got to see a portion of Teddy’s park.

The claim to fame of the park is its wild horse herd, which we were lucky enough to see in our short time there. These some 1000 horses roam free here and are truly something to behold. Like most of the plains, there are a ton of prairie dogs and bison to see roaming the banks of the Missouri River. The landscape and horses make a visit to this park the MOST interesting thing that one could do when visiting North Dakota, and I say that in the nicest way possible.

Due to the time of year that we are crossing the country, most of the things that we would like to do in Minnesota are in the far-north and simply not an option right now. We have plans for a Boundary Waters trip someday that will allow us to explore Minnesota more in-depth. An attraction that we did get to visit in Minnesota was Itasca State Park near Bemidji. Lake Itasca is the start of the Mississippi River and at the headwaters Big Muddy is a simple 8-foot wide stream.

The park is extremely nice and we gladly paid for camping to have access to the showers and water fill up. The bike trails that run through the park were also a super nice way to go check out the mighty Mississippi without having to move the bus.

Another state on our list that was relatively close to our route was Iowa. Although we would have loved to hang around for RAGBRAI (on our bucket list for sure) the only other thing that we found of interest to do in Iowa was to go caving. You read that right, we found a cave to explore in IOWA! It would be unfair to compare these caves to the caves we just explored in South Dakota as they are completely different types of caves and these are not nearly as elaborate or as well-preserved as the caves in South Dakota.
We hiked all over the small Maquoketa Caves State Parkand had mostly free rein of the some 10-12 caves in the valley. We were pleasantly surprised by the lack on any real rules or regulations in the park and it was pretty much chaos compared to the National Park managed caves that we visited in June. Would I travel across the midwest to walk around these caves in East Central Iowa? No. But I would stop in on my way to other places on the East Coast.

Iowa was also a really good stop to get my stitches removed from my misadventure in SD with a table saw. It cost $2500 to stitch my finger in South Dakota and only $97 to remove the stitches in Iowa.

Newest US National Park in Indiana

I too have been seeing the buzz all over social media about Indiana finally having a National Park, Indiana Dunes National Park. Previously designated a Lakeshore, the National Park Service has simply slapped a Nat’l Park sign on the entrance and has neglected to do much of anything else. We spent the day hanging out on the beach and attempting to enjoy the waves of Lake Michigan lapping on the sand. In true National Park style, there were thousands of people in the park and no accommodations had been made for extra trash or more porta-potties and parking at 8AM was a nightmare for a 22-foot long school bus.

We still had a good time as we tend to do just about anywhere, but we hope the NPS invests in Indiana before the next time we visit. The BEST part about our trip across the midwest was getting to meet up with a bunch of Rachael’s extended family, most of whom I (Zach) had never met. We were welcomed in to the air conditioning, thankfully, and we got to go out to lunch with most of the Fort Wayne cousins. It was an absolute treat and we now have a reason to come back to Northeast Indiana!

We made a mistake- We should have driven the West Coast of Michigan and explored the Upper Peninsula for a couple of weeks while a heat wave attacked the midwest, but we didn’t. Instead we wanted to explore part of Ontario so we drove through the least pretty and most boring section of Michigan, the Southeast. I had visited Bay City as a kid and remember it being a type of coastal town with pretty boats, I was twelve after all. We made the drive to Bay City to find a ghost town. Shops were closed in the middle of the day, streets were empty, and it just seemed like nothing had happened here in a long time, perhaps since I was there as a twelve year old.

We hung out by the river and got some work done but soon made plans to escape Michigan and head to Canada, at least we would have Tim Hortons to console us. And console us it did. Although Tim Hortons sold to the company that owns Burger King, we will still continue to patronize them as long as they continue to serve delicious crullers and affordable coffee.

Entering into Canada north of Detroit was a really smooth border crossing. Something that always happens in our bus, people tend to think we smoke weed, which we don’t. No huge political stance or moral objections to it, it’s just not our thing. The border agent seemed to think we looked like drug users and informed us several times that weed was legal in Michigan and in Canada, we simply needed to declare it, only we had nothing to declare. Ahh the joys of living in a school bus and having long hair!

We spent a few days in Canada lounging along the North Shore of Lake Erie in the little town of Port Stanley. This town was the perfect place to charge the batteries and sit in the cold lake while record highs smacked the Midwest and Northeast. We found public camping near a beach and road our bikes or walked all over town and worked in a nearby coffee shop when we needed to. It was a pleasant couple of days.

Niagara Falls was the other reason that we wanted to cross Ontario and we were not disappointed. Although Niagara is a haven for tourists, the falls are still beautiful, especially from the Canadian side. After exploring around the falls, we prepared for another breezy border crossing back into the states and we suddenly found ourselves in New York!

Upstate New York is a really interesting place to visit. The bulk of attractions in Upstate revolve around the lakes region of the Finger Lakes, Lake Champlain, and Adirondack Park. New York is also home to the Number 1 State Park in the United States, Letchworth State Park and was the site of the Winter Olympic Games in the 80’s.

As is the case with most of the Eastern US, public land is rare, but we found several good camping spots and explored the North end of the state, one of which was next to a retired fire tower. Unfortunately, we did not have a ton of time to spend in New York and hopefully we can come back and spend a bit more time when the weather is cooler.

Despite the challenges of camping for free in VT and NH, we still managed to see some sites like the Ben and Jerry’s. Factory, the Green Mountain National Forest, White Mountain National Forest, and beautiful landscapes of dense green forest along the way. We found there were simply too many people touristing for our speed. Also, the heat was a bit much. The temperature was in the 90’s during the day and high 70’s at night and in a bus with no AC, that is simply too hot.

We will likely make a weekend trip to Vermont and New Hampshire in the fall some day, but for now we are heading North!