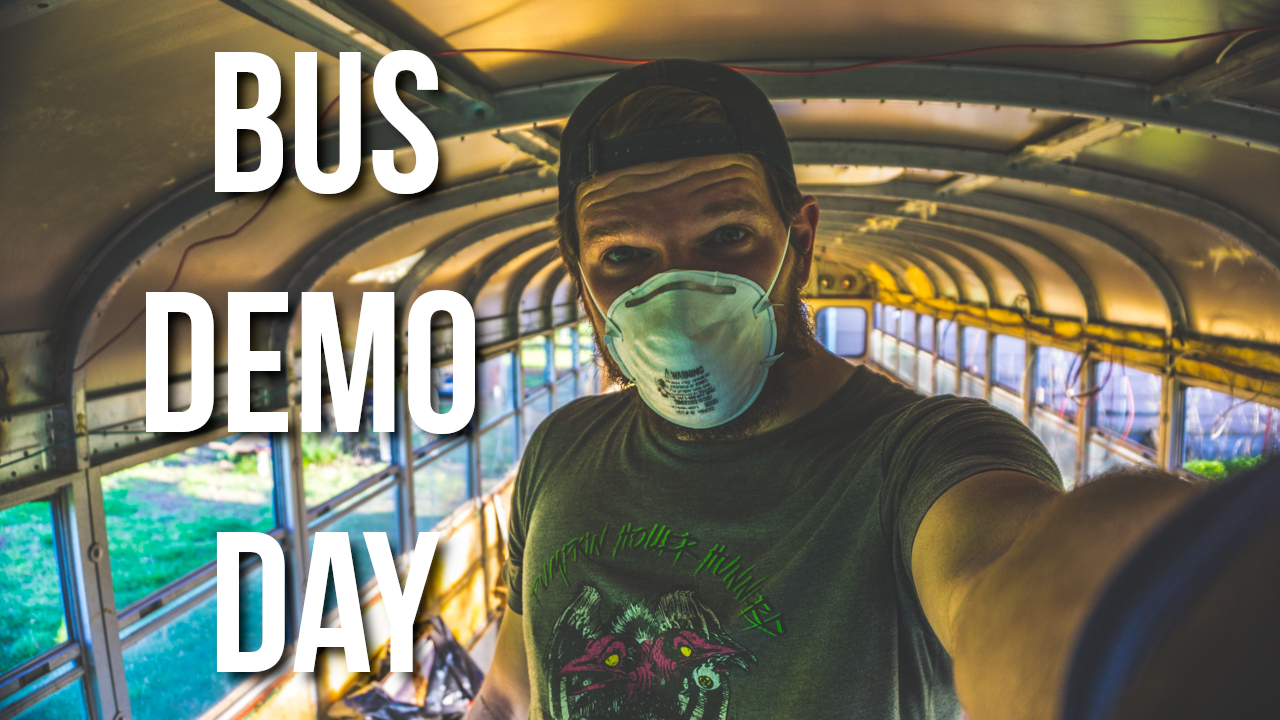 The WORST…I repeat, WORST part of any skoolie build (based on the two that we have worked on) is demolition. Our first bus was 100% stock and still had heaters and seats bolted to the soggy, candy wrapper strewn floor. We spent several days hollering back and forth from under the bus switching which bolt we were working on and eventually we got the interior completely stripped out. When we went to inspect a full-size bus for a new project we were planning, we were ecstatic to find that the seats, AC units, and heaters had all be removed and plywood had been laid down. Score one for the home team.

One problem, that continues to appear every time Rachael and I take on a new project is that we want it to be better than the last one we did. Some would call it perfectionism or being overly competitive, but it’s how we are wired and our skoolie projects are no exception. On our first build we did not remove a single riveted panel from the bus and left the terrible yellow fiberglass insulation in it’s home and it was only when we experienced 1ºF temperatures in New Mexico in February did we wish we had taken the time to insulate the entire bus. Fast forward to our new project and we are going to strip it down to the studs. We started with a drill, then an angle grinder…and finished the project with an air chisel. The air chisel was the most effective of the tools that we used by far!

Below are some of the most useful tools and supplies that we used during this stage of the build. By clicking the link below, you pay the same price as you would on Amazon, we simply receive a tiny fraction of the transaction. Everything we earn contributes to keeping this website up and keeping us on the road, so thank you in advance!

The panels above the windows and the metal end caps are secured with a bunch of #2 Phillips screws so Rachael made quick work of those and Addy-dog made sure no one snuck up on us coming down the drive.

As we were working on rivets, Rachael’s dad comes over and says he needs our eyes to see what’s going on at the neighbor’s house a mile down the road. Several police cars had blockaded the country road that Rachael grew up on and they had a helicopter circling overhead. Turns out several street-youths had tried to break into a house and were now on the run in the wilds of South Tulsa County. We spent most of the evening watching helicopters work into the dark and later we got word from an informative neighbor letting us know that all four criminals had been apprehended. Another day in rural Oklahoma.

While Rachael and Addie worked on screws and protecting us from danger, I began grinding rivets with an angle grinder. We had heard horror stories of how hard it was to remove the rivets, but the grinder made fairly quick work of them.

And just like that, 6 hours later all of the lower panels are off and we discovered a new way to remove rivets that involves a pneumatic chisel that we will share in a different post.

We were so excited when we picked up our new bus because the seats had all been removed and the rear heaters were no where to be seen. We became less excited when we pulled the subfloor and insulation up and found that they hadn’t been screwed down and that there was sitting water under the floor. That will be a project for another day once we are done chopping up metal on the outside.

With the insulation and plywood removed, there is approximately 6′ 3″ of standing height in the middle of the bus. Because I am 6′ 3″ tall, a roof raise is in order to be able to insulate the floor and ceiling like we want and still be able to walk upright. We are planning a 10-12″ roof raise beginning behind the driver’s seat and continuing to the back of the bus.

Demolition is nasty and hard work. The engineers at bus companies work very hard to make sure busses are safe and sound and it takes a lot of work to undue their efforts. Once we got all of the insulation out we went through with the air compressor and broom and blew out most of the trash and dust that was left behind.