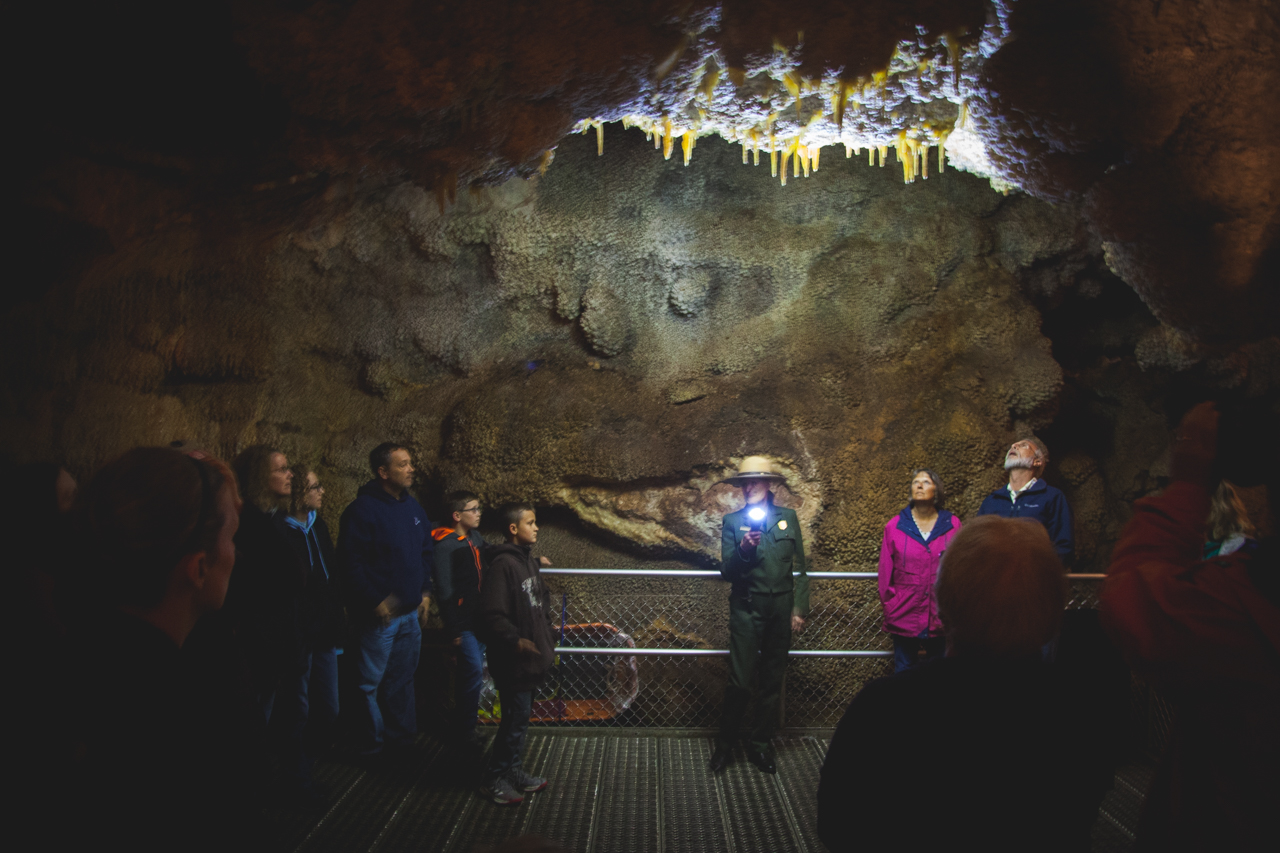 The Black Hills of South Dakota are known for a few things including Mt. Rushmore, the Crazy Horse Memorial (insert link) and some of the most beautiful scenic drives in the country. What most don’t know about Western South Dakota is that it is home to not just one, but two MASSIVE cave systems. We took the plunge (see what I did there?) and took tours at both Wind Cave National Park and Jewel Cave National Monument, both near Custer, SD.

During our time in the Black Hills, we had a day with really bad weather in the forecast so we opted to visit Wind Cave National Park, about 22 miles south of Custer, SD. Arriving at the park from the North, we were greeted into the park by a regularly occurring herd of bison near the park entrance. The Wind Cave herd is one of only 4 bison herds in North America that is relatively pure and walks freely on public land. The number of bison in the Wind Cave herd are 250-400 strong and a large portion of the herd spends most of the summer along Highway 385, near the Visitor Center. It is rumored that the herd will even perform a “South Dakota Car Wash” of your vehicle in the spring if your vehicle is carrying delicious salt on the exterior of your vehicle, by licking the salt off of your car.

The park Visitor Center is very mild and boasts standard amenities such as bathrooms, a gift shop, and a small naturalists display of wildlife and history from the area. Despite the beauty of the grassland above and the size of the bison herd, the main attraction to the park actually lies below ground, within its 150+ miles of discovered cave passageways.
The passageways of Wind Cave are unique for a couple of reasons.

First, Wind Cave contains over 95 percent of the world’s boxwork formations. Unlike formations in other popular cave systems that rely on water to drip down the rock and deposit minerals, boxwork was already present in the rock and was simply refined by the water of a once present underground lake. The result, a beautiful lace-like mesh network of sediment that makes Wind Cave one of the densest caves in the world.

Second, Wind Cave is the 7th longest cave in the world even though the footprint of the cave system is contained within only a couple of square miles. While navigating the passageways you realize the scale of the cave and how the distance is accomplished, tunnels veer in every direction from the main tunnels and rooms. It is easy to understand why some of the cave is still not explored even to this day.
The best part about a visit to Wind Cave National Park is getting to tour the caves themselves!

We chose the Fairgrounds Tour and were really happy with our choice. Our tour guide, Ranger Justin was excellent and had a very well-rounded knowledge of the cave and its history. On our tour, we meandered around the cave, crouching but never crawling, and had the opportunity to see the infamous box formation and multiple instances of frostwork. This cave was pretty tight in some places, so those that get claustrophobic should probably stay about ground. Interestingly enough there was a major lack of the two things that I expected to see in the cave: bats and water. The bats apparently hang out around the natural entrance because food and navigation is easy. Water is missing from the majority of the cave due to the lowering water table and at one point, the entire cave was filled with water.

Different from Wind Cave in about as many ways as two caves can differ that are in the same county, Jewel Cave was a very different experience after visiting Wind Cave. Jewel cave is longer and much more cavernous than Wind Cave. Jewel Cave is also longer than Wind Cave at a length of over 200 miles of discovered caves passageways. The National Park Service hosts tours that allow you to explore different areas of the cave and you can check those out on the NPS website.

The cave was discovered in 1909 when prospectors felt cool air blowing out from the cave and tours began in 1939, hosted by the NPS.
The geologic features are not nearly as rare as those that occur in Wind Cave, but there is still a few instances of box work and frost work. The most predominant crystal feature on the walls of Jewel Cave is the Spar Crystal. The Spar Crystal formations cover most of the cave that we saw on our tour with the occasional appearance of flowstone, frost work, and box work throughout. We even got the chance to see some “Cave Bacon” which is a cave feature often found in caves in the Eastern US.

Our tour guide was exceptional and had a deep knowledge (see what I did there) of the cave and it’s history. We took the Scenic Tour that lasts approximately 1 hour and 30 minutes and navigates 723 stair steps. The tour is listed by the park service as moderately strenuous, which translates to easy if you are in decent physical shape.

Okienomads Travel Tip- Arrive at Jewel Cave when it opens to purchase your tour passes first thing for later in the day, then take off to Hell Canyon (Black Hills National Forest) just down the road for a pleasant stroll through the canyon that lies above the surface of Jewel Cave.