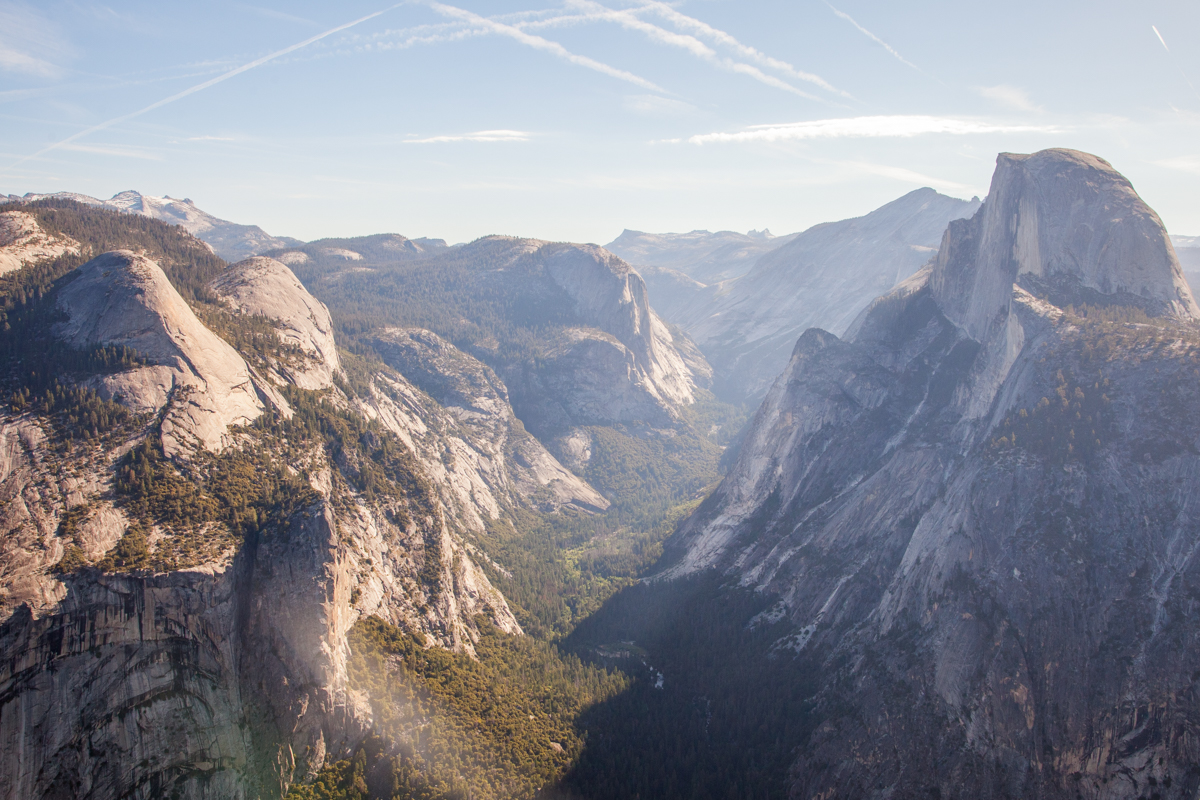 Entry into the Sierra Mountain Range was special for both of us. Neither of us had ever been to this part of the country and we had both had most of the region on our respective bucket lists for a long time. Yosemite, Kings Canyon, Tahoe, who doesn’t dream about visiting these places? This is how we did it! 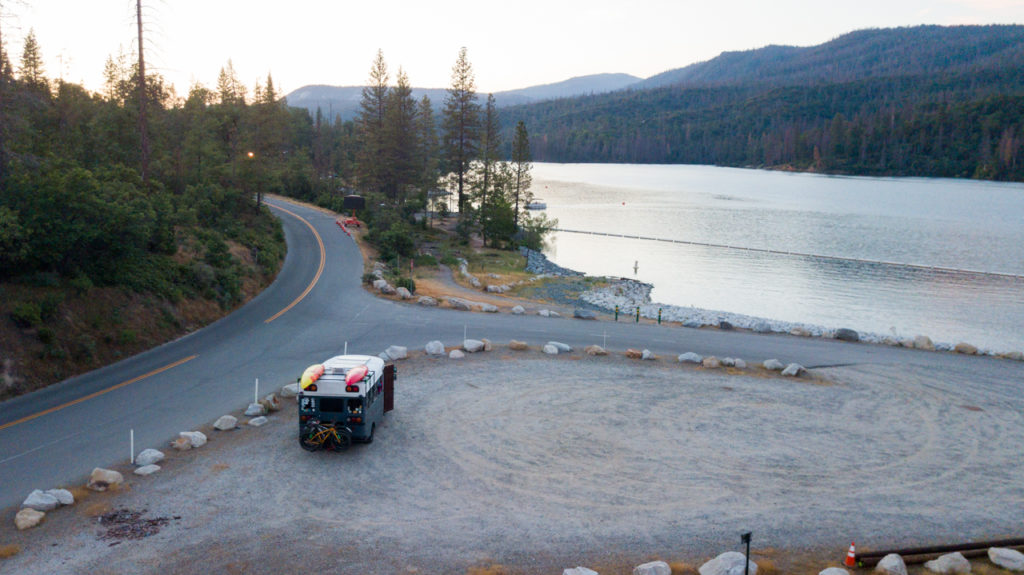 FREE CAMPING IN THE SIERRAS

Considerations for boondocking in and around California:

Parking in places that most people don’t use for camping spots can sometimes produce some weird vibes with folks. We found that being friendly and courteous of others goes a long way when living in your car, bus, or truck. When a security guard or sheriff passes you, wave and say hello. Be friendly, you will be surprised how well it will pay off. 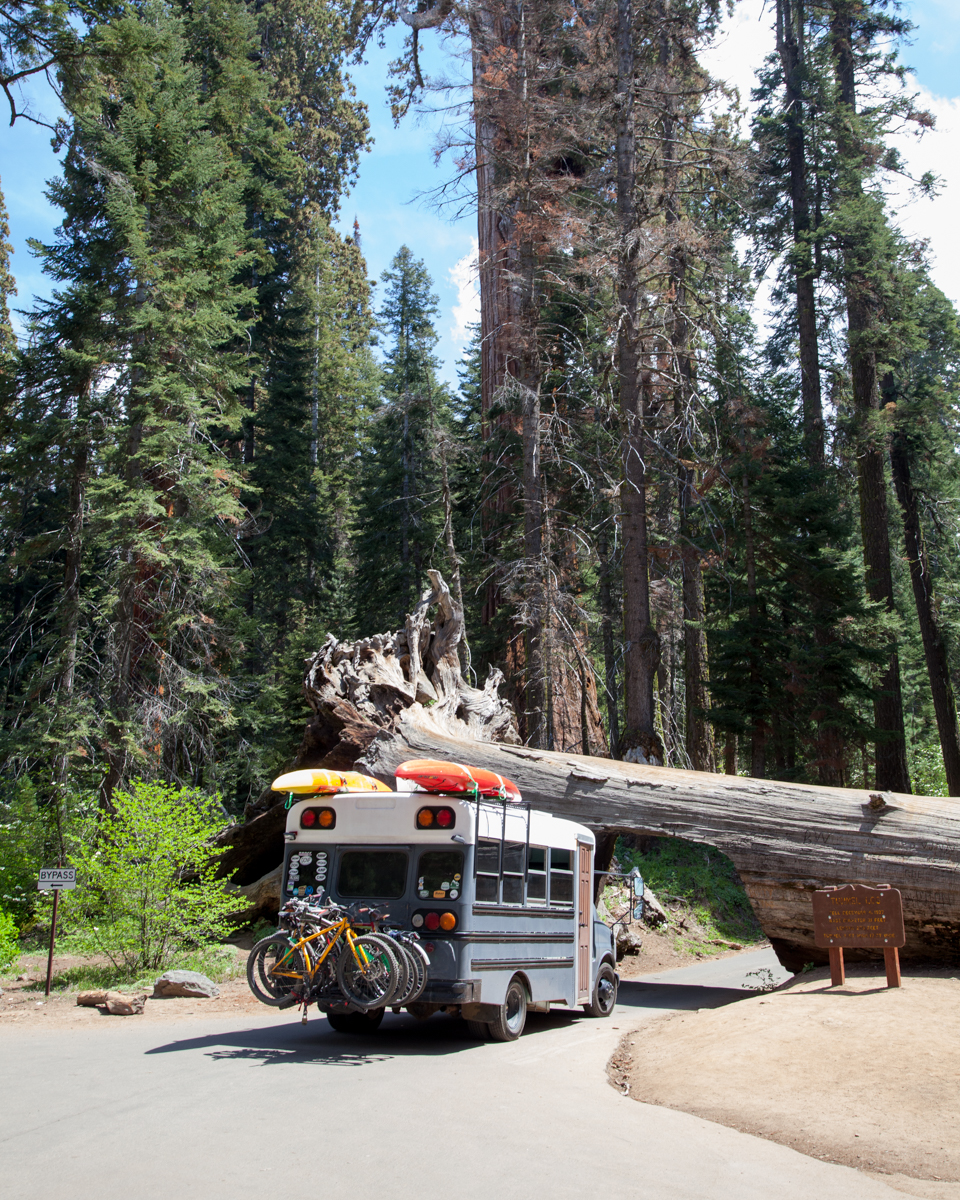 -Leave It Better Than You Found It

Our biggest complaint while traveling through California is the overuse and misuse of public lands. If you can’t dig a cat hole deep enough to bury your poop and toilet paper, you don’t deserve to enjoy public lands. Pick up your trash, bury your poop, and don’t leave food laying around in bear country. It’s really simple and when everyone takes care of public lands we all win.

California is the most diverse state in the United States. You can surf in San Diego and in a few hundred miles be scaling the granite walls of Yosemite Valley. There are bike trails, hiking trails, OHV trails, sand dunes, beach dunes, thru-hikes, rock-climbing, and so much more. We have tried to summarize our time in California with the highlights of our trip.

Sequoia National Park is one of the least crowded and most underrated of the National Parks, in our opinion. In one park you are able to see thousand-year-old trees that have withstood the efforts of humans and mother nature to grow bigger than any other living creature.

The Sherman Sequoia is worth the drive up the winding road into Sequoia National Park all on its own. Better yet, take some time and explore the backcountry of the park with an overnighter to Twin Lakes from the Lodgepole Campground. The permit process is super easy and the park rangers will even rent you a bear cannister to comply with their rules regarding bears and backpacking. If you dare, try to take a dip in Twin Lakes, it will take your breath away! 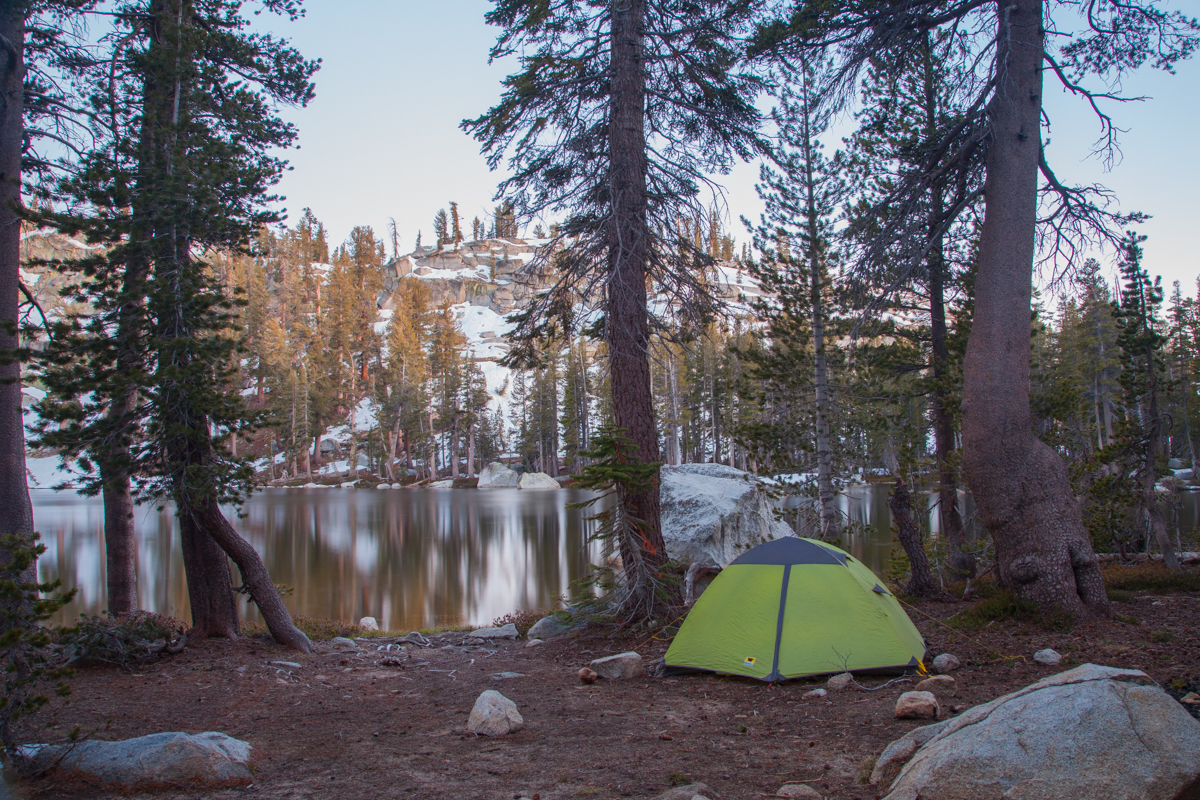 Sequoia National Park was mellow and easy to navigate. Our advice, with any National Park, is to start your day very early and enjoy watching the crowds wander onto the trail as you are heading back to camp for a mid-morning nap.

A smidge North of Sequoia National Park is a park surrounding a canyon deeper than the Grand Canyon in Arizona, Kings Canyon National Park. This park is home to amazing views of the parks namesake, Kings Canyon as well as some other notable massive trees such as the Grant Giant Sequoia. 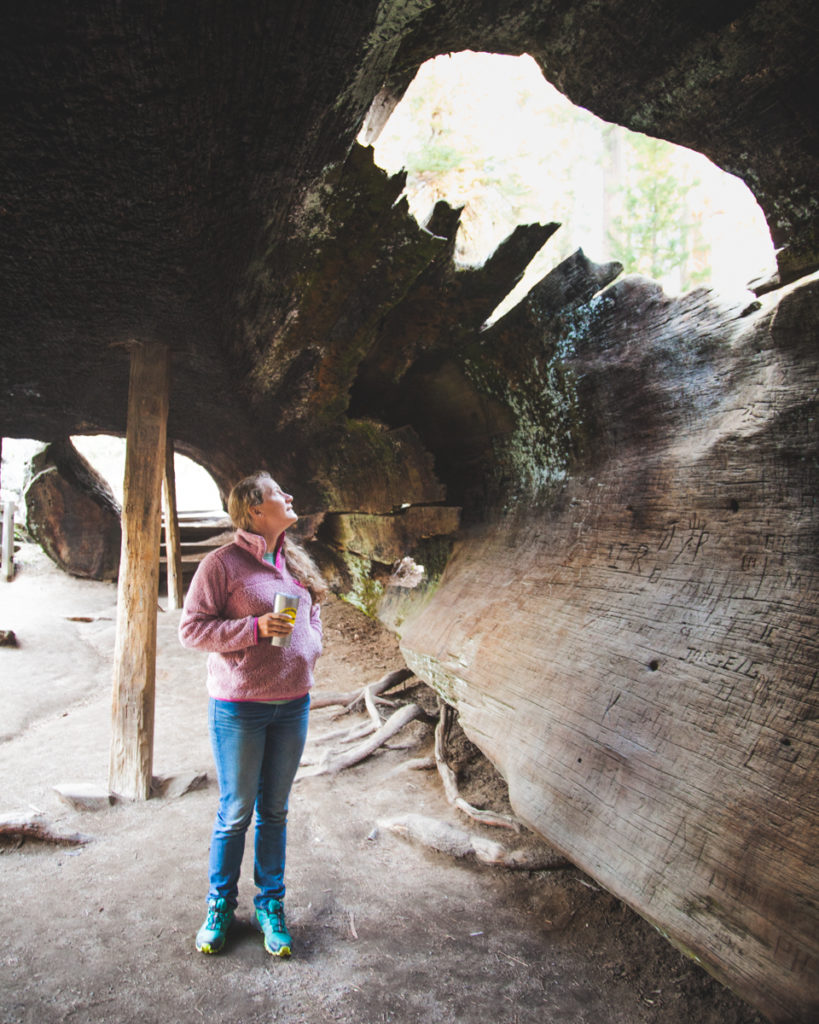 The Sierras are home to some of the most scenic and accessible hot-springs in the country. We stopped at a couple and have added a few more to our list for our next drive through California. 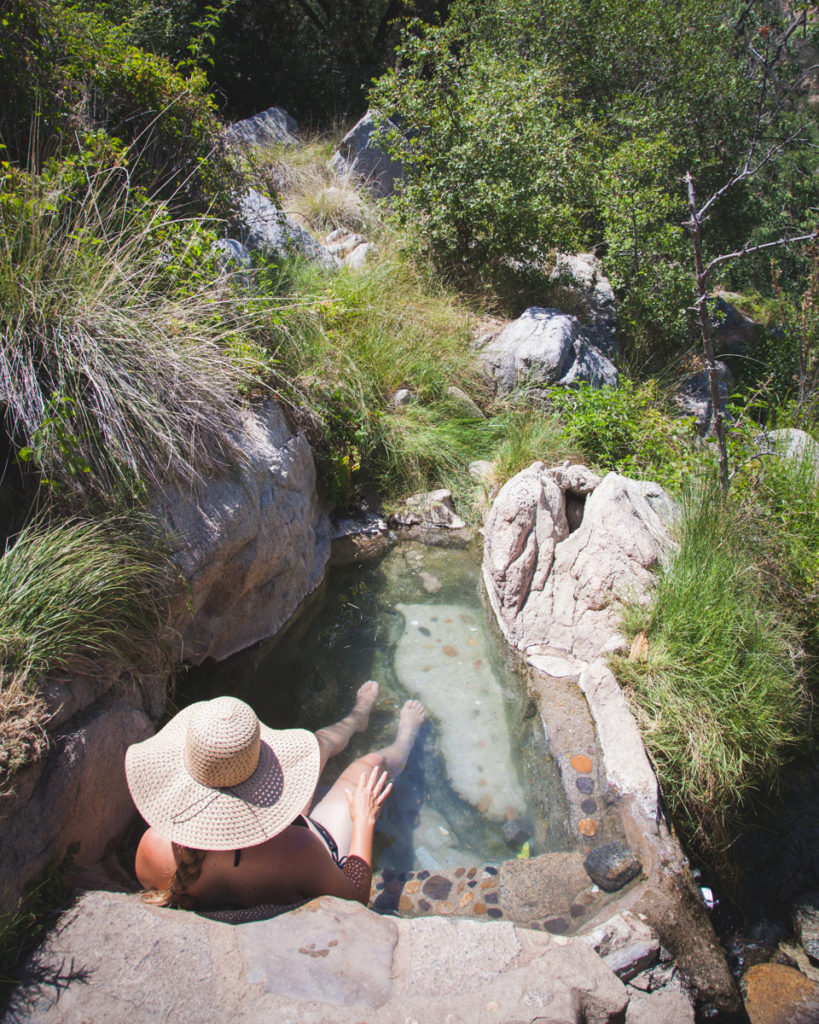 Remington Hot Springs is at the foot of the Sierra Range yet boasts some amazing scenery along the Kern River. The springs were discovered and later enclosed with rock and mortar. The temperatures vary, but we rather enjoyed the experience of swimming in the ice-cold river followed by warming up in the second-hottest hot spring.

Travertine is a BLM trail-head to a set of hot springs near the town of Bridgeport, CA. There are many springs to choose from but get there early in the day and stake your spot out, it gets busy.

*Keep in mind that many like to enjoy the hot springs in their most natural form, naked. Remember this as you are hiking over the boulders to the springs at Travertine and don’t be surprised when you make eye contact with a 90 year-old naked man slipping into the pools!

The Valley may be one of the grandest spectacles of nature that I have seen. Granite walls tower thousands of feet up from the valley floor, one of the most beautiful National Park lodges ever built, and deep green meadows that stretch as far as you can see are all reasons that everyone should see Yosemite once in their lives. 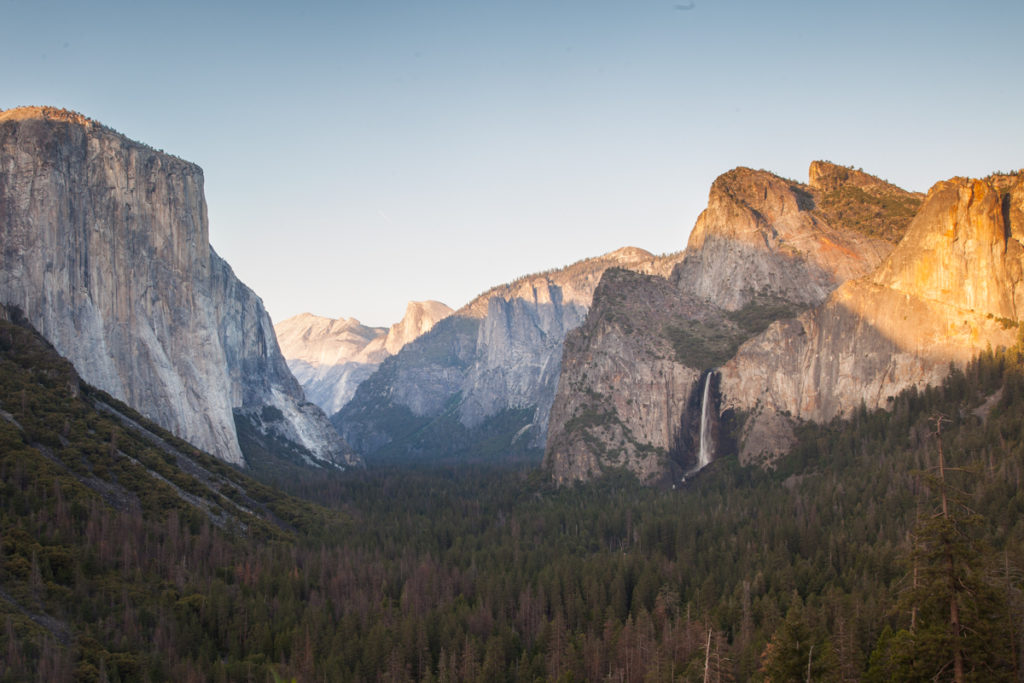 We spent our first morning in the park driving to Glacier Point, one of the most spectacular views of Yosemite from above. The road to Glacier Point is not for the oversized vehicle or those scared of heights or precipitous drop-offs. Once you reach the top though, you are rewarded with exquisite views of the valley below. Half-Dome is on full display in front of you and several HUGE waterfalls can be seen in the same blink. There are a couple of small interpretive trails around the top and some longer trails that connect to the valley. 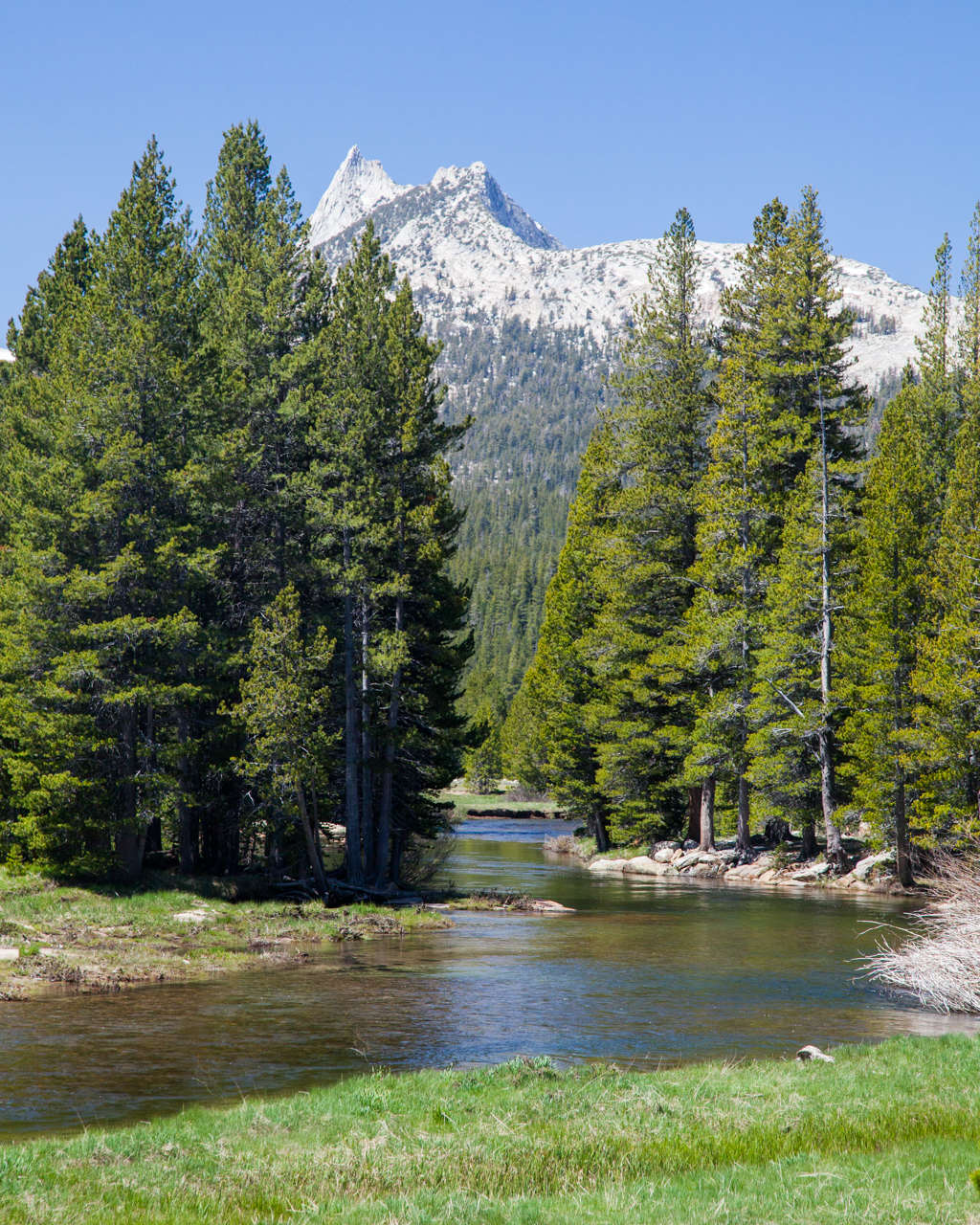 Speaking of waterfalls, if you are a waterfall junkie like we are, the Mist Trail will not disappoint. The hike begins at the Happy Isles trailhead and meanders up the valley wall past Vernal and Nevada Falls, two of the most spectacular waterfalls in California. Once you reach the top of Nevada Falls, the trail connects to the John Muir Trail (JMT). The JMT is a National Scenic Trail that wanders through some of the most iconic and beautiful areas of the United States. The JMT takes hikers back down into the valley and eventually returns to the trailhead.

An entire day could be devoted to time just in the Valley itself with sights like El-Capitan, Half-Dome, and the Awahnee Lodge towering over the Valley floor. The morning that we arrived (and added our bus to the ranks of vans, busses, and old cars that belonged to the many climbers who flock to the valley daily) Alex Honnald and Tommy Caldwell had just broken the speed record for climbing El-Cap. The valley was a buzz with reporters and climbers chatting about how they had accomplished the feat several times in the week leading up to it and were merely breaking their own record that morning. There are impressive exhibitions of human ability every week in Yosemite it seems.

As one of the lesser known and visited National Parks, Lassen Volcano National Park boasts beautiful scenery and unique geo-thermal properties that rival that of Yellowstone. 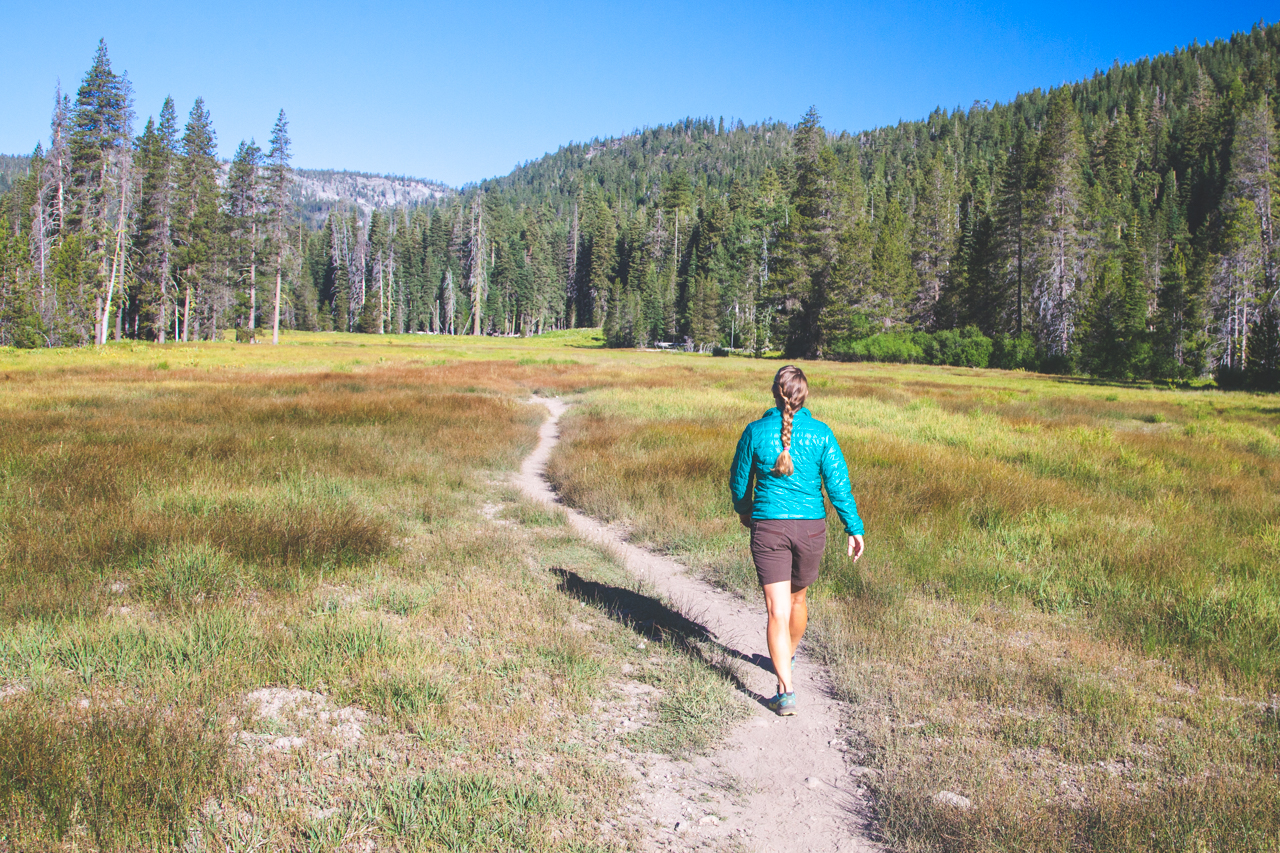 We chose to enter the park at the less popular Warner Valley Entrance and hiked the Devil’s Kitchen Trail. This easy trail crosses through Warner Valley and up the hill to the geothermal pools. 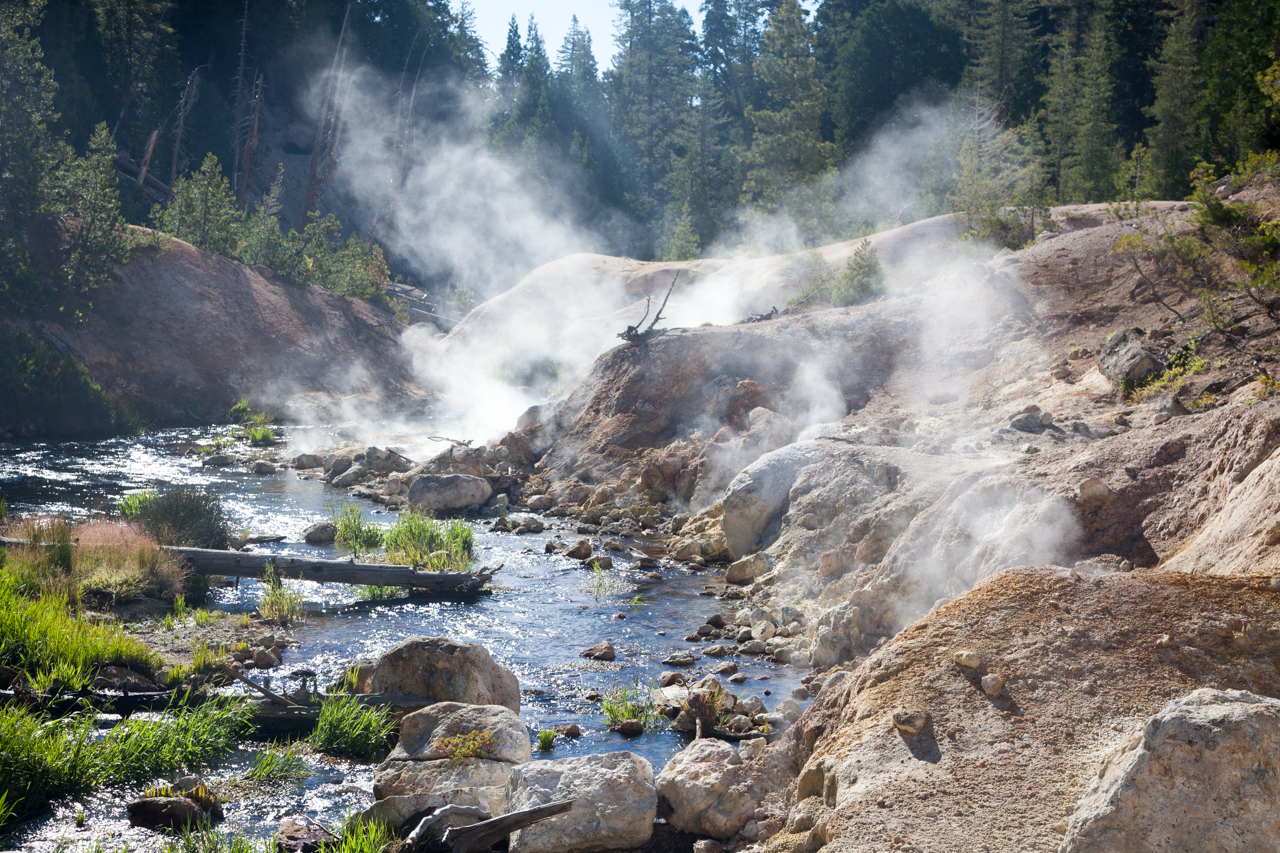 Hiking through the pools was an interesting experience as you can feel the heat and smell the sulfur. The most interesting part of the scene above is that the creek running through the area is still ice-cold while the pools and puddles around it are in excess of 100 degrees! 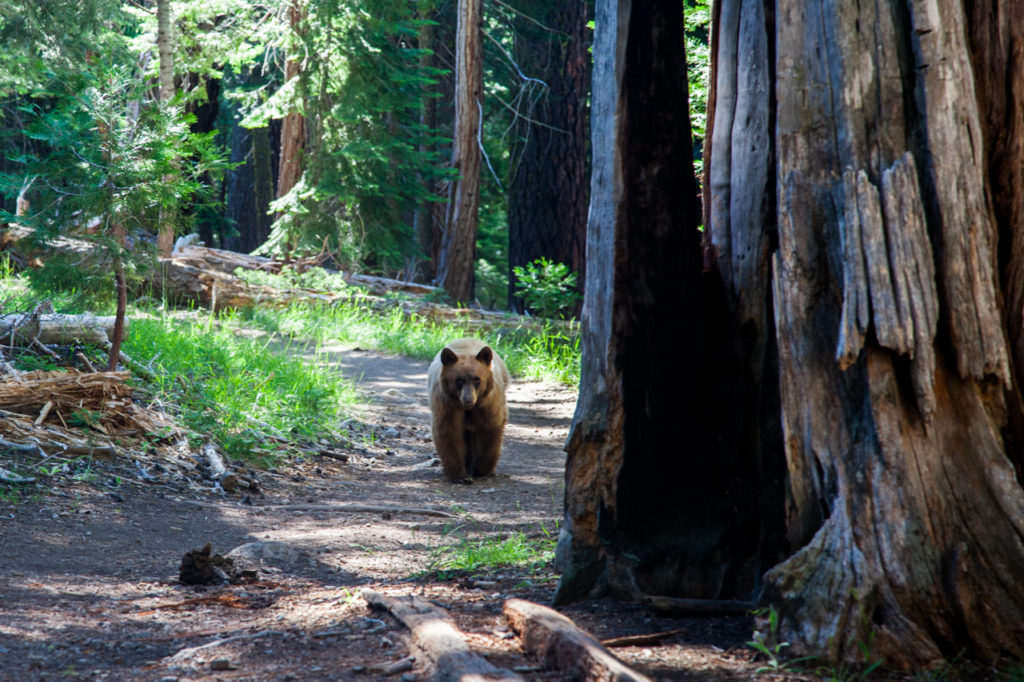 On this trail we also had our first encounter of the summer with a bear. A cinnamon black bear approached us on the trail and you can read all about that encounter in our article about it: When Nothing Works in a Bear Encounter.

Since the majority of the attractions in the Sierras are in fact, in the mountains, it is important to resupply on food and supplies before heading higher in elevation and higher in price. The National Parks and surrounding communities have done a really good job of exploiting the careless traveler with prices that sometimes exceed 200% of what they cost in the real world. While diesel fuel was still $3.85/gal in Fresno, fuel at the gas station leaving Yosemite was $6/gal! I understand the costs of getting fuel into remote places like Yosemite, but it’s not that remote, there is a major road running through it. It’s a bit of a shame when it still costs $25+ for a vehicle to enter the park and $40+ to camp for a night in a parking lot, but the Parks can still gouge tourists for fuel.

I digress. We resupplied in Fresno before heading into the mountains and had really good luck with the shopping center near Woodward Park on Nees Ave. There was a Trader Joe’s and a Sportsman’s Warehouse so we were able to stock up on all of our food needs and replace any broken gear or supplies that had run out. We missed a few things and had to pick them up in Oakhurst, CA and the prices weren’t overly inflated on most things but there were simply less stores to choose from. 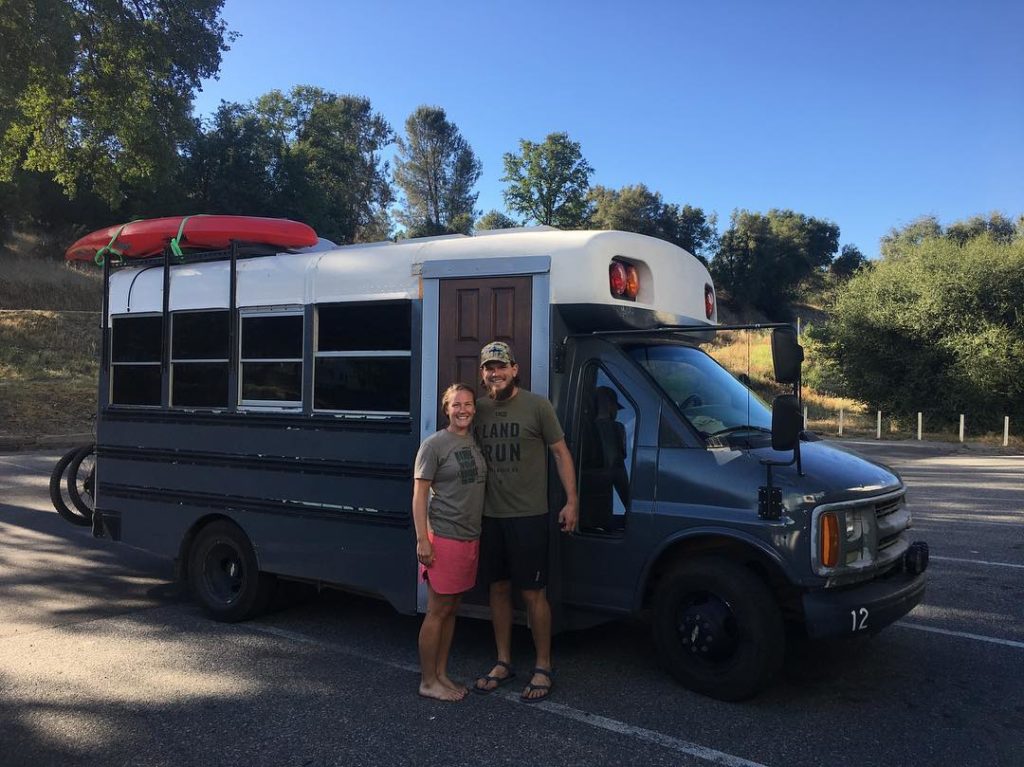 Part of the appeal of traveling through parts of the country where really affluent sportsmen recreate is that they will sell their old gear to used gear stores and we can in-turn get a lightly used piece of gear that we couldn’t previously have afforded. That’s the idea behind Alpenglow Used Gear.

This shop is just starting out but is located right off of the highway and already offers a wide supply of used clothing, cycling gear, climbing gear, backpacking gear, and much more. The staff is super fun and we even ran into him utilizing another local small business at the coffee shop in town; it’s very cool to see small businesses supporting each other in a tight knit community as well as giving back through trail clean ups and conservation.

We tend to only use coffee shops when we need wi-fi and this shop was sufficient at uploading some images and getting out. The atmosphere was really fun but the clientele made our experience crummy, through no fault of the shop. A table of nearly ten, seemingly intoxicated, street youths spent over two hours yelling, screaming, and carrying on while the rest of us tried to enjoy the mellow music that none of us could hear. We would really like to come back and visit this shop again to give it a fair shake.

If you need to resupply on food or supplies, nearby cities of Fresno or Bakersfield are in the valley and quite warm but have all of the stores you would need before a few weeks in the mountains.

The Sierras have been spectacular to visit and we already have a list of sites that we want to spend more time in including visiting this area in the winter when the crowds are smaller and the parks are empty.

2 thoughts on “The Sierras”